The Coronation of Kind George V

Between ranked soldiers and sailors at the present, the famous team of cream ponies rolled the ornate state coach in which sat King George V and Queen Mary.

Following the precedent of the Jubilee, the procession was held on two days, to cover a greater area of territory and to admit of more people seeing it than would otherwise have been possible.

The cinema becomes an industry 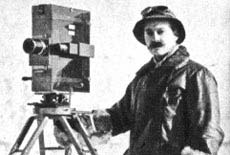 The earliest films, unless they were shown in variety theatres at the end of the programme to "play the audience out" or in town halls, were shown to shops "converted" into halls. These proved dangerous owing to the lack of exit facilities in the (frequent) event of fire. Laner, came properly built and equipped cinema theatres. One of the earliest of these picturedromes was the modern film theatre at Hitchin at the time of King George's coronation.

Something of a theatrical sensation was caused in 1911 by the success of a company of Scottish players, until then unknown to London. Headed by Graham Moffat, who wrote the play, they came to Haymarket and the novelty of the pawky-peasant humour took the town by storm.

One of the more startling of pre-war fashions. The shoes worn with them were also hand-painted.

Railway Strike! One of the most serious paralyses of transport ever recorded occured in 1911. The sufferings were frightful owing to the heat which reached the record temperature in London of 100 degrees in the shade.